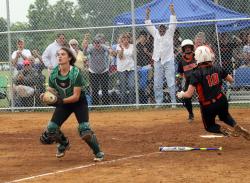 TURBOTVILLE — There are tough losses and then there is what happened to Wellsboro.

In a rematch of last year's District IV, Class AA softball title game the Milton Black Panthers once again had runners on first and second in the bottom half of the seventh.

This time the game was tied at 1-1 but the feeling was familiar as then came the hard shot on the third base side just like last year.

But while last year's hard hit ball turned into a quick double play for the Hornets, and a district title, this year's hit found the outfield grass, more than enough space to allow Milton to score and win 2-1.

All the difference a year, along with a few feet, can make.

"It was hard fought by both teams," said Wellsboro coach Greg Carr. "Both teams pitched well, both teams played great defense. You just kind of knew something like that was going to be the way it was going to end, whether it was us or them, and that time it was them. We've made a run the last six, seven, eight games and they've been in our favor."

The Black Panthers out hit Wellsboro 7-5 as runners got on base most innings for both teams but were typically stranded there. The two teams combined to leave 11 runners on base as the pitchers ruled the contest.

Milton's Kylie Brouse was effective from the start, hitting that outside corner time and again to put the Wellsboro batters in a hole from the start. Eighteen of the 26 batters she faced got a first pitch strike.

Brouse finished with seven strikeouts in all with no walks or hit batsmen. She went the full seven innings, throwing 79 pitches while allowing five hits and one earned run to get the win.

The Hornets tag teamed in the circle as Alexa Singer started and went twice through the order before Alyssa Yungwirth came on in relief.

Singer threw 53 pitches in 4 1/3-innings, striking out four while allowing five hits and one earned run.

Yungwirth also threw 53 pitches but in 2 1/3-innings. She struck out five while allowing two hits, one hit batsman and one earned run, all in the seventh.

"I just wanted them to see something different," Carr said about changing pitchers halfway through the game. "Alexa kept us in there, she had a little rough stretch there. She bounced out a little bit but she got her feet underneath her and did well. I was waiting for their line-up to get to a certain point to see something different and it worked up until the second time around. A hit here, a hit there, the game's over."

Wellsboro got on top first as Yungwirth hit a one out single in the top of the second. She would steal second to put herself in scoring position.

Then with two outs Brianne Keane hit a blooper that found its way into a gap in the short outfield allowing Yungwirth to score and put the Hornets up 1-0.

Milton threatened in the bottom half of the inning as Leighton Chappell led off with a single but would ultimately be stranded at third.

The Black Panthers got their offense going in the bottom of the third and this time they would get on the scoreboard.

With two outs Maddy East hit one into the right-center gap. What typically would be a single turned into a triple as neither Wellsboro outfielder could get to the ball and it rolled to the fence.

Next batter up Kasey Reitz doubled into the same spot, scoring East and tying the game up at 1-1.

Both teams stranded a runner on first in the fourth, though Wellsboro's Sarah Ingerick gave the Hornets fans a rise when she led off the inning with a long fly ball to center field that Milton outfielder East caught at the fence.

In the fifth Wellsboro's Emma Poirier hit a 2-out double. Jenny Young then hit a blooper into short right field but Milton's second baseman Reitz made a running catch to save a run and keep the game tied.

In the bottom half of the inning Saige Graham started a small rally with a one out single followed by East drawing a walk to put runners on first and second.

Singer, though, buckled down and struck the next two batters out to end the threat.

The Hornets' last best chance to score came in the top half of the sixth as Sydney Tremper led off with a first pitch bunt single. A Sarah Ingerick sacrifice fly moved her to second base and that's when things got a little controversial.

Darci Warriner hit a ground ball to Reitz at second, who appeared to bobble it and then rush the throw. The first base umpire initially indicated safe, which would put Wellsboro runners on first and third with one out.

But after a group huddle by the umps it was decided that Warriner was out, leaving Tremper at third with two outs.

Reitz then came up big again as she nabbed a Yungwirth line drive out of the air to end Wellsboro's at bat.

Then came the bottom of the seventh.

Up until that point Yungwirth, who came in with one out in the fifth, looked like she had all post season long: dominant. She had just struck out the side in the bottom of the sixth, accumulating five strike outs in 1 2/3-innings.

She got Hailey Aunkst to fly out to center field to start the inning, then Chloe Perrin grounded out to put the game 1-out away from free softball.

But a ground ball by Graham found a small gap between third base and Keane, Wellsboro's third baseman, for her second hit of the day. Then on a 2-2 count Yungwirth hit East on her change-up to put runners on first and second.

Reit then hit a 1-1 pitch into left field and rest was history, at least for Milton. The Black Panthers claimed the district title then went the short trip home to graduation.

Wellsboro's trip back was a little longer.

Poirier was 1-for-2 with her double while Tremper, Warriner, Yungwirth and Keane also had hits for the Hornets.

For the Wellsboro seniors this marks the end of quite a 2-year run. Last year they brought home Wellsboro's first district softball title, this year they came up just short.

"We've definitely made a lot of history," added Ingerick. "Spending the last four with these girls is incredible."

This was Carr's last season as coach as well and he'll be going out with the foursome of Warriner, Ingerick, Singer and Young next season.

"Great seniors, a great, great class," he said. "We're going to ride off in the sunset together. This was my last year and I couldn't ride off with a better four kids than those four kids right there."