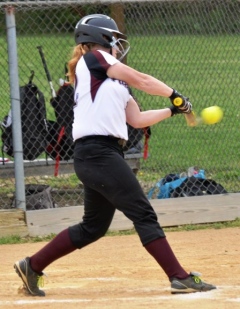 The Wellsboro Green Hornets wrapped up the season with an 18-2 record after a 4-1 win over South Williamsport on Friday.

Sarah Ingerick had a 3-for-3 day with an RBI for Wellsboro and Jenny Young had three hits, while Alyssa Yungwirth had a hit and two RBI.

Alexa Singer started on the mound, striking out five in five innings and Yungwirth struck out one and allowed no hits in two innings of relief. Singer got the win for Wellsboro and Yungwirth had the save.

LERAYSVILLE - Gabby Slater allowed just three hits, and one unearned run, striking out six and walking none for the Panthers on Friday.

Danielle Moore had two doubles, two runs scored and four RBI and Hannah Dum had a double, a run scored and three RBI.

Jaycee Brown scored a run and Rachael Allis had a hit.

McKenna Wheaton had three hits and scored two runs and Katie Boardman had a hit and scored a run.

Annie Williams scored two runs and had an RBI and Gaby Slater had an RBI.

Dana Koontz had a hit and an RBI and Shelby Park scored a run.

The Redskins scored three runs in the sixth to rally for the win on Friday.

Kassie Winters had three hits, two RBI and scored two runs and on the mound she allowed six hits and four runs, just one earned, striking out seven.

Heather Croft had two hits and scored a run for Sayre and Kate Cron had a hit and two RBI.

Sydney Post had a hit for Sayre and Paige Wampole had a hit and an RBI, while Jaycee Henry and Alla Post scored runs.

Emily Strange had two hits, with a double, for Liberty, scoring a run and Mariah Berguson had a double and two RBI.

Britta Berguson and Ryley Kotulka scored runs and Kristina Buchanan and Emma Koppenhaven each had hits and an RBI, while Jillian Berguson had a hit and scored a run.