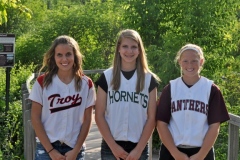 At the plate and on the mound Notre Dame's Olivia May was dominant in leading the Crusaders to a Section 4, Class C final this year.

At the plate she hit over .600 with 11 home runs, on the mound she posted a .44 ERA with over 200 strikeouts in guiding one of the areas youngest team to a sectional final.

For her efforts May is The Daily & Sunday Review softball All-Region player of the year.

Sam Mennig had a breakout season on the mound as a sophomore, guiding the Waverly Wolverines to the Section 4, Class B final and she is the pitcher of the year.

Anchoring the Troy defense from the catcher position Kelly Bridgham is the defensive player of the year, while her coach Brian Canfield is the coach of the year after helping to lead the Trojans to the NTL East title.

Calla Johnson helped guide the Northeast Bradford Panthers to the District 4, Class A title and she is the offensive player of the year, while Wellsboro freshman Sarah Ingerick had a big year as a freshman and is the newcomer of the year.

May, Mennig, Johnson, Bridgham and Ingerick are all first team picks, along with Northeast Bradford's MaKaylah Holbert, Maddy Johnson and Chelsie Souto.

Wellsboro's Maggie Smith is on the first team along with Troy's Faith Ceely and Wyalusing's Ally and Kasey Devoir.

Athens' Mackenzie Hafer and Towanda's Koryn Wickwire and Alaina Wickwire are on the first team along with Tioga's Sam Wood.

Waverly's Sabrina Bowman and Notre Dame's Mackenzie Maloney and Alivia Clark round out the first team.

Tioga's Bry Godfrey and Notre Dame's Brooke Smith are on the third team with Canton's Kellsy Ross and Chelsey Heatley.

The outfield winners are Maddy Johnson, Bristol and Godfrey.