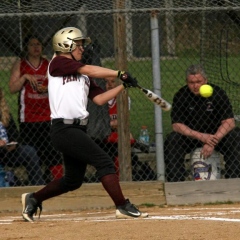 Route went 2-for-4 with a home run while Ward was 2-for-3 with a triple with two runs scored.

Athens took an early lead as Mackenzie Hafer scored off a Jensen Dunkling RBI double to put the Wildcats up 1-0. In the second it was Christin Dunkling scoring Sarah Munn to make it 2-0.

The Warriors then scored five unanswered runs beginning in the third as Emily Jennings doubled, then scored two batters later off a Chelsey Heatley fielder's choice.

In the fourth after Ward's triple Maggy Machmer sacrificed her in to knot it up at two-all.

In the fifth Jennings scored again off a Heatley fielder's choice followed by Route's solo shot to make it 4-2 Canton.

The final Warrior run was in the top of the sixth as Ward scored off an Emily Ambruch fielder's choice to make it 5-2.

In the bottom half of the inning the Wildcats got two runs as Morgan Westbrook scored off a balk followed by Miranda Peterson hitting a solo shot.

Heatley and Jennings had the other two Canton hits with Heatley's a double. Heatley also got the win, striking out five while allowing nine hits, four earned runs and no walks.

Mackenzie Hafer and Katelyn Serfass both went 2-for-3 to lead Athens while Jensen Dunkling, Westbrook, Peterson, Munn and Christin Dunkling had the other Wildcat hits.

Kassandra Winters started, going two innings two allow two hits. Christin Dunkling came on in relief and gets the loss, going the final five to strikeout one with four hits, two earned runs and one walk.

The Rams picked up an NTL softball cross-over win Wednesday.

The Hornets led 1-0 after the first inning but Wyalusing scored in the second and third to take a 2-1 lead which they kept the rest of the way.

Arielle Kneller, Ciera Holland and Maddy Eberlin all went 2-for-3 with Kneller scoring a run and Holland knocking one in. Erin Canfield added a double with an RBI while Ally DeVoir and Mackenzie Martin also had hits. DeVoir also scored a run.

Emily Faulkner scored the win, striking out nine while allowing one walk, three hits and one earned run.

Sarah Ingerick had a home run for the Hornets while Maggie Smith and Alexa Singer also had hits.

The Cardinals took a 3-0 lead after the first inning then made it 4-0 in the top of the third. Waverly scored three in the bottom half of the inning to get back into it, then added two more in the fifth to secure the win.

Kiana Manuel was 2-for-3 with a run scored while Megan Wilbur and Sabrina Bowman also had hits with Bowman's a double.

Ciara Davison led Newark Valley with two hits, including a double, with 2-RBI.

LERAYSVILLE - Chelsie Souto continued her strong pitching from the circle, striking out 10 in the Panther's NTL softball cross-over win Wednesday.

She allowed three hits and one walk.

Maddy Johnson went 4-for-4 with three runs and 3-RBI to lead Northeast while Calla Johnson was 3-for-4 with double, triple, run scored and 3-RBI. MaKaylah Holbert (2-for-4) and Bridget Haverly (2-for-2) also had multiple hits in the game with Holbert added two runs and 2-RBI while Haverly also crossed home.

Shelby Park also had a hit with a run scored for the Panthers.

Rachel Strange had a 2-run home run in the first inning for Liberty while Mariah Berguson went 2-for-2 with a run scored.

Katie Carrigan started and gets the loss striking out one. Madison Wise came on in relief.

The Panthers travel to CV Friday.

WYSOX - The Black Knights scored seven runs in the bottom of the sixth to pull out an NTL softball cross-over win Wednesday.

A Jamie Cook 2-run home run put Williamson up 2-0 in the top of the first but Towanda countered with three in the bottom half of the inning.

After three scoreless innings Towanda scored two in the fifth, then had the big sixth inning for the win.

Koryn Wickwire (3-for-5), Emily Gorman (3-for-4) and Laci Manning (2-for-2) had multiple hit afternoons for the Knights.

Cook, Sierra Magnotta and Kim Daugherty had the three Williamson hits with Magnotta the other run.

Towanda will be at the Williamsport tournament Friday with a 6 p.m. start, then will be back down there on Saturday morning.

Sam Wood threw a one-hitter as the Tigers picked up an IAC softball win Wednesday.

Wood struck out 10 while issuing no walks to get the victory.

Dani Barto and Katelyn Stubbs both went 2-for-2 to lead Tioga. Barto added two run and 2-RBI while Stubbs scored and knocked in a run.

Vergason and VanDruff had 2-RBI each while Wood, Godrey and Pond also knocked in runs.

Tioga will travel to OM today.

Whitney Earle went 2-for-2 with an RBI and two runs scored to lead the Indians to an NTL cross-over softball win Wednesday.

Sayre led 1-0 after the first inning but CV tied it up in the second. They added four runs in the fourth to pick up the victory.

Taylor Hager gets the win for CV with three strikeouts and one walk.

Kristyn Tappan was 2-for-2 with an RBI while Kelly Villanti had a double and scored their run. Kaitlyn Tappan also had a hit for the Redskins.

Despite giving up a run Notre Dame's Olivia May struck out 14 in a no hitter as the Crusader's picked up an IAC win Wednesday.

Mackenzie Maloney (2-for-3) and Alivia Clark (2-for-3) had multiple hit games. They had 2-RBI each with Clark scoring twice and Maloney scoring once.

Allie Wichtkowski also had a hit while May scored twice with Brooke Smith scoring once.

The Griffins hung with CMVT until the fourth inning when CMVT scored six runs to earn the win.

Addie Jordan had a double and an RBI for the Griffins while also turning a double play. Shelby Zeller, Brianna Baumunk, Alyssa Blasi and Emily McMahon had hits for the Sullivan.

Zeller, Baumunk, Blasi and McMahon all scored while Blasi drove in a run.

Blasi scored the loss, striking out three while allowing 12 walks.

Late Tuesday Sullivan lost to Bloomsburg 20-0. Blasi had one strikeout in the loss.