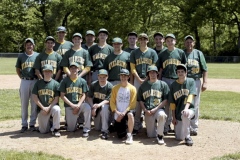 SAYRE - The Wyalusing Rams used a four-run third inning to get a 4-3 victory over Athens on Saturday to help them capture the NTL East baseball championship.

"It's going to be hard to wipe the smiles off our faces this weekend," Wyalusing coach Dave Hitchcock said. "I'm glad that Athens came to play, my hats off to them. They didn't have anything to play for, but they really came to play, they are a good team."

Hitchcock knows that this year his team did more than anyone expected.

"We have been over achievers all season long," Hitchcock said. "I told these guys at the beginning of the season, if we play as a team we will win ball games. We win as a team and lose as a team."

Athens had taken the early lead in the second inning as Curt Moore walked and came around to score.

The Rams got their big inning in the third as Kye Novak, Joey Champluvier and Logan Hitchcock all walked to load the bases.

With one out Dominic Ciccolini brought in two runs and with two outs Cody Pickett got a two-run single to make it 4-1.

Athens cut into the lead in the sixth inning as Justin Schlosser reached on an error and Craig Moore hit a one-out, two-run home run to make it 4-3.

"Having a win before district play begins is always good," Hitchcock said. "And, to win in such dramatic fashion like we did today is awesome."

For Athens, Troy Stivason had a hit and three stolen bases and Schlosser and Curt Moore scored runs, while Moore also had a hit.

Craig Moore had two hits, with the two-run home run, and Nick Bradley had a hit.

Wyalusing has a bye in the first round of districts and plays the winner of Towanda and Danville on Thursday.

Andrew Andreychek limited Towanda to four hits and struck out 14 in the complete game effort as the Ironmen defeated the Black Knights to earn a spot in districts and a first-round playoff matchup at Towanda.

After the loss, the Black Knights will now host Danville at 4:30 p.m. Tuesday.

"We faced a really strong pitcher, we came out and attacked him very well in the first inning," Towanda coach Bill Sexton said. "We had him on the ropes, he got himself off and after that he was pretty dominant."

In the first inning Casey Huff reached on an error and stole second and Mason Roof had an RBI single to make it 1-0. Towanda had two runners on when the inning ended after a Zack Ripic hit, but they were unable to increase the lead and Danville got three runs in the second and three in the third.

Tristan James went five innings on the mound for Towanda, striking out four, walking four and allowing seven hits and six runs, but only one of them was earned.

"I thought Tristan James deserved better than what he got today," Sexton said. "I thought he threw pretty effectively today. We made five errors behind him and had two other plays that didn't go as errors, but were mental errors."

Towanda got a run back in the fifth as Dylan Bates led off with a single and moved to second on a passed ball and third on a wild pitch, before scoring on a Grady Robinson groundout.

Sawyer Strope pitched 1/3 of an inning for Towanda, allowing one hit and one unearned run and Ripic struck out two and walked one in 2/3 innings of scoreless baseball.

The Tigers scored three in the second and two in the fourth to overcome a 2-0 first inning deficit.

Cody Bennett had two hits and scored two runs and Ryan Vergason had two hits, with a double, and a run scored.

Jake Howland had two hits and three RBI and Zach Williams and Peter Simmons each scored runs, with Simmons adding a hit.

Carter Jackson had two hits, with a double, a run scored and two RBI, and Dakota Skinner had an RBI.

Jackson struck out eight, walked one and allowed six hits and four runs, two earned, with one walk, in five innings, while Jesse Manuel struck out four and walked one in two innings to get the save.

Jordan Tyson took the loss for Spencer and Tyler Ellinson pitched in relief.

The Tigers scored 11 runs in the second on their way to the victory.

"It's just a nice win for the tournament," Tioga coach Bob Seymour said. "The kids had a lot of fun playing with wooden bats. It was a good day overall as we get ready for sectionals on Tuesday."

Tioga is home with Sidney on Tuesday.

The Griffins finished the regular season with their fourth straight win to go 12-8 on the year.

Sullivan County had an eight-run four inning in the win.

Zach Meyer had two hits, with a double, and a pair of runs scored and Connor Wylie scored a run.

Tom Blasi had two hits, with a double, a run scored and an RBI and Forrest Jordan had an RBI, while Jake Gavitt scored a run.

Sean Flannery had a double and a run scored and Robert Hoffman and Tim Kramer had hits.

The Griffins host Muncy in districts on Tuesday.

Emily Faulkner struck out three and allowed four hits in the victory on Saturday.

Offensively Arielle Kneller was 3-for-3 with a double, a triple and three runs scored and Laci Holdren had a hit.

Ciera Holland had a hit and a run scored and Faulkner and Chadwick each had hits with runs scored, with Chadwick's hit being a double.

Alexa Daddona had two hits for Athens and Jenn Wells had a hit, while Searah Kennedy had a hit and scored a run.

Christin Dunkling started for Athens, striking out four in the game.