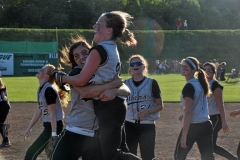 WILLIAMSPORT - Early on Wednesday, both Katleyn Serfass and her catcher Jenn Wells realized that the pitcher was on.

"About the middle of the second inning I felt it," Serfass said.

"I was really sure about then that she would shut them down," Wells added.

And the top seed in the District 4, Class AAA playoffs never really could get anything going against the junior left-hander, as she limited Jersey Shore to just three hits, walking one and striking out six in a 2-0 shutout victory.

The win puts the Wildcats into the District 4 finals for the first time in school history.

"It's awesome, I've never felt this way before," Wells said.

All game long, Serfass felt like things were going well.

And the Athens coaches realized that it could be a pretty special day.

"When we face the better hitting teams we like to throw her," Rich Decatur said. "She's one of our three pitchers and she's not the hardest thrower, but she has a lot of movement and they can't figure it out.

"A game like today, it's the first person to make a mistake that loses, and we didn't make any that cost us anything."

Like Serfass, Decatur believes it was that movement that made her so tough to hit.

"Today she hit her spots really good, she was in control," Decatur said. "It was probably the best game she has ever thrown."

While Serfass was keeping Jersey Shore off the board, Arika Stopper was holding the Wildcats scoreless until the sixth inning.

It was number seven hitter Abbie Beck that got things started in the sixth, leading off with a single. Kiersten Horton reached base on an error and after a flyout, Alexa Daddona walked to load the bases.

After Stopper got a strikeout, freshman Jensen Dunkling came up with the bases loaded and two outs and drew a walk that scored Beck.

"It felt good," Beck said of crossing the plate with the game's first run.

For Dunkling it was tough being that patient with the bases loaded.

"It was hard, but I had my teammates there for me encouraging me on," she said.

Decatur said that Dunkling doesn't play like a freshman.

"She scared me a couple of times taking some close pitches, but I have a lot of faith in her," Decatur said. "As a freshman, she plays like a senior."

Christin Dunkling followed with an RBI single to score Horton to make it 2-0.

All game long the Wildcats felt like they could hit Stopper, it just took until that sixth inning to break through.

"It was really hard, when we were hitting the ball right at someone," Wells said.

Athens had another chance in the seventh as Beck got a one-out hit and Horton and Kennedy followed with singles to load the bases, but Stopper got a fielder's choice and a groundout to end the threat.

The bottom three in the lineup, Beck, Horton and Searah Kennedy, were a combined 4-8 in the game scoring both runs for the Wildcats.

"Everyone really stepped up," Decatur said. "Especially, Abbie. She's had a few rough games later in the season, but she really had a big game. The bottom of the lineup was our savior today."

Decatur knows that after knocking off the top seed his team is capable of bringing home the district crown.

"They have the mindset that they can win this," he said.

For Athens this was a year of ups and downs, but as the season has gone on they have come together as a team.

"It started out rough this year, but it's gotten better," Beck said.

"We knew we could do this," Wells added.

And, the players know that wins over Wyalusing and Towanda during the season started to give them the confidence that they could compete with anyone.

"It's really nice to prove everyone wrong," Wells said.

Beck led the Athens offense with two hits and scored a run and Horton and Kennedy each had hits, with Horton scoring a run.

Christin Dunkling and Alexa Daddona had the other hits for Athens, with Dunkling getting an RBI and Jensen Dunkling had an RBI on the bases-loaded walk.

Stopper, Hannah Yost and Kayla Allen had the hits for Jersey Shore in the game.

The Wildcats take on Milton in the District 4, Class AAA final today at 4:30 p.m. at Elm Park.