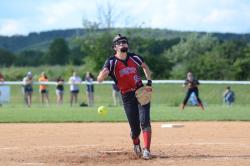 TURBOTVILLE — It came down to who was just a little sharper over the final few innings as Mifflinburg and North Penn-Liberty met to decide the District 4 Class AAA Championship at Mosser Complex in Turbotville.

Unfortunately for North Penn-Liberty, it was the Wildcats who were just a little sharper as they took advantage of a couple fielding mistakes to squeeze out a 3-1 win.

"They made awesome plays," North Penn-Liberty coach Lynn Grinnell said. "They were here to win and we were here to win too, but we just fell short. I told the girls when you come to a game like this you have to limit your errors and we had a few errors."

The costly error came in the second inning after a lead-off double from Madison Machmer. She didn't have to wait long as an error from the pitcher helped bring her home. Vanessa Boop, who reached on the error, then scored on a single from Hailey Foresman out of the No. 9 spot in the lineup.

"It was the errors that hurt us," Grinnell said. "The errors hurt us and our energy level wasn't where it normally is. That hurts any team. It really hurts your play."

After the three runs over the first two innings, North Penn-Liberty returned to form on the defensive end. Over the final four innings, just one extra Mifflinburg batter made an appearance as Savanah Doney zoned in.

"We can still hold our heads high," Grinnell said. "We are going to states and we'll be ready."

North Penn-Liberty scored its lone run when Brooke Harvey connected with a single in the opening frame. She moved to second on a fielder's choice and eventually scored when Mackenzie Heater drove a single through the infield.