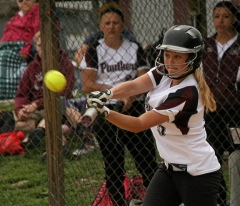 Four different Panthers had multiple hits in the game while the Mountaineers went through three pitchers.

Maddy Johnson (2-for-4) had a double and run scored for NEB while Katie Boardman (2-for-2) had a triple with three runs, Hannah Dum (2-for-2) scored twice and Gabby Slater went 2-for-4.

Dani Moore had a double with two runs scored while Annie Williams and Megan Brown both had hits.

Slater got the win in the circle as she struck out seven and allowed six hits and no walks.

Krissy Buchanan went 2-for-2 with a run scored to lead the Mountaineers while Emily Strange, Mariah Berguson, Emma Koppenhaver and Britta Berguson also had hits.

Buchanan started and earns the loss as she went 1 1/3-innings.

Strange came on in relief and pitched 1 2/3-innings with one strikeout.

Mariah Berguson threw the final inning, striking out one.

The Panthers will face Cowanesque Valley in the semi-finals down at Warrior Run Tuesday with a 4 p.m. start.

Jessi Prutsman's 2-RBI hit in the top of the fourth sent CV through to the District IV, Class A softball semi-finals Thursday.

Prutsman finished up 2-for-3 with a double on the day.

Becky Plummer was 1-for-3 with a run scored while Kayla Schauer also went 1-for-3.

Muncy got their lone run in the bottom of the fifth.

Haley Gyurina went 2-for-4 with a double and run scored to lead Muncy.

Cowanesque will now face NEB next Tuesday in the semi-finals at Warrior Run with a 4 p.m. start.

In the bottom of the sixth a 2-out base hit by Jordan Butters scored Alexa Singer from second base to propel the Hornets to the District IV, Class AA softball semi-finals Thursday.

Singer had a 1-out single and was then sacrificed over to second base by Paige Carr.

South's best chance to score was in the top of the fourth with two outs as a runner from second tried to reach home on a Hannah Hennigan base hit but Jenny Young threw her out at the plate.

Alyssa Yungwirth got the win for Wellsboro, striking out nine while allowing three hits and one walk.

Young, Singer and Butters all went 1-for-3.

The Hornets will face defending state champions Central Columbia next Tuesday in the semi-finals with a 4 p.m. start at Warrior Run.