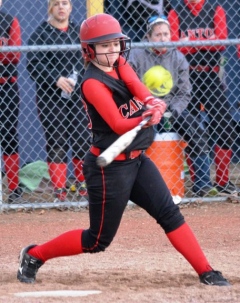 MANSFIELD - The Liberty softball team opened the season with a 5-3 win over Canton on Thursday afternoon.

Liberty had a three run sixth-inning to pick up the victory.

Devaney Colton had a hit and Mariah Berguson scored a run for Liberty.

Berguson allowed seven hits on the mound, striking out four for Liberty.

Maggy Machmer had a pair of hits for Canton and Vanessa Wesneski had two hits, with a double, and an RBI.

Lauryn Watkins had a hit and a run scored and Lacey Castle and Ward each had hits, while Emily Jennings and Abby Herman scored runs.

Rica Dimon hit for the cycle to lead Athens to the win.

Dimon had a home run, a triple, a double and a single and scored four runs in the win.

Aubrey Allen had a 4-for-4 day with two triples and two runs scored and Jensen Dunkling had three hits, with a double, triple and three runs scored.

Mackenzie Warner had three hits with a double and three runs scored and Sarah Munn had a hit and scored a run.

Lexi Morley had a hit and Reagan Lynch had a hit for Athens.

Kassie Winters had three hits, with a double and a run scored for Athens, and Kate Cron had two hits with a triple.

Paige Wampole and Caitlin Garrity each had hits and Heather Croft and Sydney Post scored runs.

Winters started on the mound for Sayre.