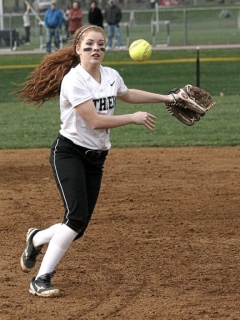 ATHENS - Athens jumped out early and used that advantage as they beat Troy 7-5 in NTL Large School softball action Monday.

This is the first Trojan loss of the season.

The Wildcats led 2-0 after the first but Troy went up 3-1 in the top of the third. Athens would rally in the bottom half of the inning to knot it up three all.

In the top of the fourth the Trojans went up 5-3 with two runs but it was in the bottom half of the inning when the Wildcats went up for good.

They scored four runs, sparked by a Jensen Dunkling 2-run home run to lead off the at bat.

From there their defense held for the victory.

Dunkling was 2-for-4 with two runs and 2-RBI to lead the Wildcats while Reagan Lynch was 2-for-3 wiht a run scored.

Mackenzie Warner added a double with 2-RBI while Lexi Morely, Aubrey Allen and Rica Dimon all had hits.

Kaitlyn Testen, Morely and Allen also scored with Allen and Dimon knocking in runs, too.

Allen went the distance for the win, striking out three while allowing three walks, four hits and one earned run.

Bristol, Ceely and Taylor Murray had one RBI each.

Hoffman started and earned the loss, going 3 2/3-innings to strike out three while allowing seven hits, two walks and all seven runs, four of which were earned.

Troy is at CV Wednesday while Athens hosts Wyalusing.

CV scored in the top of the seventh to break a 3-3 tie and earn the NTL Small School softball win Monday.

CV led 2-0 after three with both teams getting a run in the fifth. Canton added two more in the bottom of the sixth to knot things up before the Indians got the win.

Jessi Prutsman was 2-for-4 with a triple and an RBI while Kayla Schauer (2-for-4) and Whitney Earl (2-for-3) also had multiple hits in the game. Schauer added 2-RBI and two runs.

Becky Plummer had a double with a run scored while Madeline Heyler also had a hit.

Hatch started and went 4 1/3-innings for the no decision, striking out three while allowing no hits, five walks and one earned run.

Taylor Hager came on in relief and scored the win, striking out one while allowing three hits, two earned runs and three walks in 2 2/3-innings.

Joslyn Spencer and Kelsey Griffin both went 1-for-2 with an RBI for the Warriors while Sidney Wheeler also had a hit.

Lauryn Watkins scored twice with Kayla Ward scoring once while Abby Herman had an RBI.

Griffin started and earned the loss for Canton, striking out one while allowing eight hits, one walk and two earned runs.

Paige Carr went 3-for-3 with an RBI as the Lady Hornets picked up an NTL Large School softball win Monday.

Baylea Lehman was 2-for-3 with an RBI while Jenny Young had a hit with 3-RBIs.

Alexa Singer started and struck out one in the no decision while Alyssa Yungwirth came on in relief and earned the win, striking out four.

Lauren Smith led Liberty at the plate, going 2-for-4 with 2-RBI while Brianna Berguson and Krissy Buchanan had one hit each.

Mariah Berguson started while Buchanan came on in relief.

The Hornets are at NEB Wednesday.