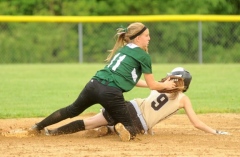 CATAWISSA RR - Wellsboro coach Greg Carr hinted prior to the start of Thursday's District 4 Class AA quarterfinal matchup between his Hornets and Southern Columbia that his squad was capable of hitting the long ball.

Jordan Butters belted a pair of no-doubt home runs as the Hornets sent five over the fence in surprising the Tigers 10-5.

"I know as a team we are capable of hitting home runs," the Wellsboro coach said. "To hit five in the same game against a quality team like Southern Columbia is somewhat surprising but it could not have come at a better time for us."

Wellsboro found itself trailing 3-2 heading into the third inning when Sarah Ingerick, who came into the game with 30 hits in 62 at-bats, tied the game at 3-3 with a solo home run to center field. Then, after one out, Butters hit the first of her two monstrous home runs with a line drive over the left field fence that put Wellsboro (15-5) into the lead for good at 4-3. Losing pitcher Abbey Herr got out of further trouble by inducing two ground outs to second to end the inning.

The Tigers (15-6) immediately attempted to rally in the bottom of the inning when Taylor Hoffman singled to center, and after Herr grounded out, Blair Johnston walked to put runners on first and second. In what may have been the turning point of the game, Carr took out his starter Alexa Singer and brought in backup Brooke Kohler, who threw only one pitch but it was a rally killer with Haley Levan lining into a double play to end the threat.

"That was a big double play because it looked like we were about to regain the momentum we had lost," Tigers' head coach Al Cihocki said. "They came up with a big defensive play and on one pitch she got their team out of trouble."

The Hornets increased their lead to 5-3 in the fourth when Peyton Wilson belted a solo home run to center field. However, the visitors took control of the game in the fifth with a four-run outburst on a pair of two-run homers that all but took the wind out of the Tigers' sails.

"As a coach, you never go into a game looking to hit home runs but would rather your team produced a consistent offensive attack and could put hits together to score runs," Carr said. "Today, we just made great contact with the ball and fortunately they went over the fence.

"As far as changing pitchers, I thought my starter was missing her spots and felt a move was necessary. I have complete faith in Brooke (Kohler) and she got the job done."

Cihocki, on the other hand, was frustrated with his team's inability to hit with runners on base.

Erin Yoder tripled with two outs in the fourth. The next batter flied out to end the inning. In the fifth, after Hoffman and Herr each singled with one out, the Tigers could only manage Johnston's sacrifice fly, and in the seventh, the Tigers could only scratch out one run following a walk to Dunkleberger and Herr's RBI double.

"We had runners on base but couldn't string several hits together to produce a big inning," Cihocki said. "Credit goes to Wellsboro because they put the bat on the ball but for us the only problem was five times it went over the fence and we did not answer back.

"This was a great year for this young team and we'll bounce back."

In addition to the home runs, Ingerick and Carr both contributed a single to the 13-hit attack while Darci Warriner chipped in with a double and single.

The Tigers were paced by Herr's double and two singles followed by Hoffman's two singles.