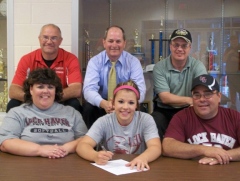 When she was growing up, Canton's Morgan Palmer got a chance to watch Lock Haven play softball.

She got a chance to see the PSAC team that has won national championships in person as a young softball player, and next season she will get a chance to be a member of the Lock Haven softball team.

"I have watched Lock Haven play quite a few times when I was younger," Palmer said. "I played travel ball at BAGSAI (in Binghamton) and they always had a tournament there for a lot of the college teams. (Troy graduate) Kate Pratt plays at Mansfield and Lock Haven plays them quite a bit and I watched Kate play against Lock Haven."

In her career Palmer has faced players like Troy's Pratt and Allie Earle, and now she will face them again in the PSAC as they both play for Mansfield.

"To watch them play in college and be able to play at their level is great," Palmer said. "I'm so excited. It's going to be a lot of fun.

"I watched Allie Earle play and it was her freshman year and she did a tremendous job as a freshman. It's a confidence booster for me to see her be able to play as a freshman."

Watching other NTL players get a chance to excel in the conference helped Palmer, so did her visit down to Lock Haven.

"My travel ball coach, his niece goes to Lock Haven and I just talked to him a lot over the summer about it," Palmer said. "When I went to visit there I had a lot of fun. The girl I stayed with Sarah Schwalm was really nice and it seemed like a really nice college and a really nice program. And the NCAA Championship trophies in the coaches' office were cool.

"The girl I stayed with at Lock Haven, Sarah Schwalm, she was a starter at shortstop as a freshman over a senior and that gave me a lot of confidence that if I do well I can have a chance to play as a freshman."

Palmer knows that her versatility is one of the thing the Lock Haven coaches like about her.

"I'm pretty sure I'll be able to find myself a nice spot out there if I work hard. They had eight juniors this year and they will be seniors next year. I'll get my time to learn then I should have a good chance to get a spot to play."

Lock Haven also had all the academics that Palmer wanted.

"I am going for criminal justice and I talked to the head of the department," Palmer said. "She said I'm going to do great there. She was very nice to talk to and they have a great program."

Playing in state in the PSAC will be fun for Palmer because her friends and family will get a chance to watch her play.

"I'm so excited, my family are my biggest fans," she said. "I love having them there to watch my games, and they love coming to watch softball. I am just so excited. I can't wait to go to college and be in that atmosphere and have fun playing softball."