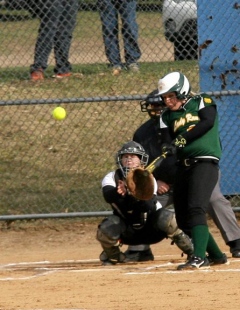 WYSOX - Kasey DeVoir had a home run and Wyalusing exploded for seven runs in the fourth on their way to a 13-3 win over Towanda in NTL softball action on Thursday.

Faulkner struck out 10 on the mound for Wyalusing.

Emily Gorman had two doubles for Towanda, scoring a run, and Sam Schoonover had two hits, with a double and she scored a run.

Alaina Wickwire scored a run and Koryn Wickwire had a hit.

Alaina Wickwire, Tara Welliver and Casey Hawley combined to strike out four on the mound for Towanda.

The Black Knights host Susquehanna at 11 a.m. on Saturday.

ATHENS - The Indians scored five runs in the second inning as they picked up the NTL softball win Thursday.

After taking a 5-0 lead the Wildcats chipped away, scoring runs in the third and fourth to cut it to 5-2.

CV added another run in the fifth to push the lead back to 6-2, then scored two more in the top of the seventh to go up 8-2.

Makenzie Hafer hit a home run in the bottom of the seventh for Athens to make it an 8-3 final. Hafer finished with two hits, two RBI and a run scored.

Jessie Prutsman led CV, going 3-for-4 with a triple, RBI and two runs scored while Shanelle Ianson went 2-for-4 with a home run.

In the circle Ianson got the win, striking out five.

For Athens Haley Priester scored a run and Reagan Lynch and Hannah Reid had hits. Jensen Dunkling and Aubrey Allen had hits and Miranda Peterson had a hit and scored a run.

Alivia Clark allowed just two hits and no walks while striking out nine as the Crusaders picked up an IAC softball win Thursday.

They jumped out early, scoring five in the first inning, then made it 7-0 in the top of the fourth. Candor cut it to 7-1 in the bottom half of the inning.

Both teams scored a run in the fifth while Notre Dame added three more in the sixth to secure the win.

Mackenzie Mahajan and Morgan Cox both went 2-for-5 to lead the Crusaders. Mahajan scored twice while Cox scored once with an RBI.

Brooke Harvey added a triple with three runs scored, Clark had a double with two runs while Ally Wichtowski had a hit and run scored as well.

For Candor Makayla Short went 1-for-3 with a run scored while also scoring the loss. She struck out six while allowing seven hits and nine walks.

The Tigers stayed unbeaten in division play with their IAC softball win Thursday.

They scored two runs in each of the first three innings to pick up the victory.

Despite not getting a hit Dani Barto led the way for Tioga, walking three times while scoring two runs and stealing two bases, which included home.

Taylor Ayres went 2-for-4 with an RBI while Kaitlyn Stubbs and Sam Wood had one hit each. Stubbs knocked in a run while Wood scored.

Wood earned the win, striking out 12 while allowing two hits, no walks and no earned runs.

Morgan Price and Lisa Nelson had one hit each to lead SVE.

Three Troy pitchers combined to throw a three-hitter as they picked up an NTL win Thursday.

Taylor Johnston was 3-for-4 with a double and RBI to lead Troy while Kelsey Bristol went 2-for-3 with a triple and two runs scored.

Faith Ceely and Stephani both scored twice while Mattocks, Hoffman and Taylor Murray each scored once.

Stephani, Mattocks and Losey-Root each knocked a run in.

Kellsy Ross took the loss for Canton. She struck out three while allowing 10 hits and two walks.

Ross had a double for Canton and Kayla Ward and Kelsey Griffin each added hits.

Paige and Brook Wampole each had two hits for Sayre in the game, with Brook hitting a triple and Paige getting a double in the win.

Caitlyn Garrity had a double for the Redskins.

Kendra Colegrove and Makayla Butz had two hits for Williamson and Sarah Bates had a hit and scored a run and Sam Herrington had a hit and an RBI.

Emily McMahon had three hits and scored three runs and the Griffins scored nine runs in the first two innings to get the win.

Kiess struck out five on the mound for Sullivan County.