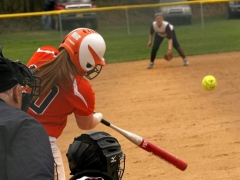 The Black Knights jumped out early, scoring two in the top of the first, followed by another run in the fourth. They added four more in the seventh to secure the win.

Gorman had two doubles with 2-RBI while Laci Manning (2-for-4) and Sam Schoonover (2-for-4) also had multiple hits in the game. Manning added two runs with 3-RBI while Schoonover also scored.

Koryn Wickwire added a double with two runs while MacKenzie Roof had a hit with a run scored.

Alaina Wickwire allowed just three hits in the win while striking out three.

For the Panthers Calla Johnson had a triple, Courtney Coleman had a double while Monica Brown also had a hit.

"I'm really happy with the kids," remarked Tioga coach Jim Wood. "This is my 11th varsity season and this is probably the most satisfying division title we've won. Eight of the 11 girls are freshmen or sophomores."

Wood credits his team's chemistry to their success.

"They have the best team chemistry that we've had in the 11 years I've been here without question," explained Wood. "They love playing for each other and it shows. This division title, a large part of it, was because the team chemistry was so good. They play well with and for each other, I'm very pleased at this point."

Wood earned the win, striking out seven with no walks.

The Tigers, 9-2 in the IAC, will now face Union Springs for the overall Small School title next Wednesday at Cornell University with a 4:30 p.m. start but first have three games on the slate to finish this week.

"It's been a real effort all season," said Wood. "With the rough weather these girls have been mentally pretty tough. Night in and night out they've given good performances. I'm very proud of them."

The Wildcats kept their playoff hopes alive by rallying for the NTL softball win Wednesday.

Down 5-4 heading into the bottom of the sixth Mackenzie Hafer hit a bases loaded single to score Kaitlyn Testen and tie the game up.

Then with two outs Jensen Dunkling hit a double to score Reagan Lynch, who proved to be the winning run.

Dunkling went 4-for-4 in the game with 2-RBI and a run scored while Hafer was 2-for-3 with a run scored and an RBI.

Emma Durst came on in relief and scored the loss. She struck out three while allowing eight hits, one walk and four earned runs.

The Warriors held off a Mountaineer rally to pick up the NTL softball win Wednesday.

Canton jumped out to a 6-1 lead but Liberty scored three in the bottom of the sixth to cut it to 6-4. However, the Warriors kept them scoreless in the seventh to earn the win.

Maggy Machmer went 2-for-4 with a double, two runs and 2-RBI to lead Canton while Kellsy Ross added a double with two runs. Kayla Shay added a double while Makenzy Route and Kelsey Griffith also had hits.

Mariah Berguson went 2-for-3 with two runs and an RBI to lead the Mountaineers while Lauren Smith, Kristina Buchanan, Emily Strange and Mackenzy Payne also had hits.

Buchanan started and went 4 1/3-innings to earn the loss. She struck out one while allowing five hits, one walk and three earned runs.

Berguson finished up, allowing a hit and walk.

The Rams broke open a 2-1 game with five runs in the final two innings to pick up the NTL softball win Wednesday.

Crewson and Kate Epler both scored.

Emily Faulkner earned the win, allowing six hits and no walks while striking out four.

Taylor Johnston was 3-for-4 with a double and two runs to lead the Trojans to the NTL win Wednesday.

In the circle Murray earned the win, striking out five with one walk.

Kiana Manuel went 4-for-5 with a double, triple, three runs and 3-RBI to lead the Wolverines to the win.

Becca Morgan and Kalie Herriman both had hits for Waverly. Morgan and Morgan Salsman both scored three times while Herriman also crossed home.

Morgan and Herriman both knocked in a run.

Sam Mennig earned the win, striking out 14 for the perfect game.

Makenzy Maloney went 2-for-3 with a home run, three runs and 5-RBI to lead the Crusaders to the IAC win Wednesday.

Alivia Clark added a hit with two runs and an RBI while Allie Wichtowski also had a hit with a run scored.

Clark had 14 strikeouts in the win allowing just a hit.