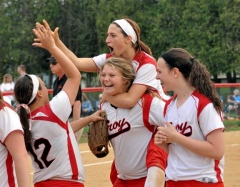 EAST TROY - A lot has changed in NTL softball over the past three years.

However, there has been one constant, each of the past three seasons the Troy Trojans captured an NTL title.

First it was the NTL West crown two years ago. Then last year the NTL East title. Now, it's the NTL Division I crown for the Trojans after a 5-0 win over Towanda on Friday.

"It's pretty exciting," senior Kayla Stephani said. "It's definitely different. I'm used to having older kids and classmates and I'm the only senior now."

While Stephani is the catcher, and the team's lone senior, the team's starting pitcher is just starting her career as Kerrigan Hoffman got the win on Friday as a freshman.

With new pitchers this year Stephani knows she has to take on a leadership role behind the plate.

"She is a freshman pitcher and we have a junior pitcher. Actually all our other pitchers are junior and we all work well together," Stephani said. "When she (Hoffman) or any of our pitchers get nervous I try and talk to them and tell them to relax."

"It feels really good," Hoffman said. "The whole team did good. It was a team effort."

On Friday the Trojans got two runs in the first inning and two more in the third on their way to the win.

"It feels good that all the hard work and practices paid off," Kelsey Bristol added.

After Troy got three hits in the first inning Towanda's Alaina Wickwire allowed just one more hit the rest of the game, striking out five and allowing five runs, but none earned.

The Trojans knew that this game would be a test after beating Towanda in extra innings earlier in the year.

For Troy that win at Towanda helped set the stage for winning the NTL title.

"That was a big one for us," Brooke Mattocks said.

Another big moment for the Trojans was when they went to the Williamsport Tournament and finished with a 2-1 mark there.

"That showed we could play with good teams," Taylor Johnston said.

The Trojans know that the hard work during the season and all those tough games during the year helped lead them to this moment.

"We worked hard every game," Ceely said. "It's really great to have a leader like Kayla and be able to win this for her."

"It was a real team effort," Johnston added.

In the first inning Friday Bristol and Ceely led off with singles and both of them scored on a Mattocks hit.

In the third inning Bristol reached on an error and Ceely singled and both came around to score on an error to make it 4-0.

Troy added a run in the sixth inning when Mattocks scored.

Koryn Wickwire had a double for Towanda and Alaina Wickwire and Mackenzie Roof added hits in the loss.

Now that they have captured the NTL title the Trojans are looking forward to seeing how they can do in districts.

"I don't think we have any limits," Bristol said.

The Panthers got a 4-hit day from Maddy Johnson, who scored three runs in the win on Friday.

Calla Johnson had two hits and scored two runs and Angelia Laudermilch had a hit and scored a run.

Chelsie Souto had three hits and Courtney Coleman had two hits and scored a run.

Danielle Moore had three hits, with a triple, and two runs scored and Annie Williams had a hit.

The Rams got three hits each from Ally and Kasey DeVoir in the victory on Friday.

Ally DeVoir had a double, a triple and three RBI with four runs scored and Kasey had an RBI and scored two runs.

Paighton Martin scored three runs for Wyalusing and Emily Faulkner had two hits and an RBI.

Ciera Holland had a hit and an RBI and Kyleigh Ward scored a run.

Miranda Peterson had a double and two RBI for Athens and Aubrey Allen had two doubles and scored two runs.

The two teams play again today at 4:30 p.m. at Wyalusing.

The Green Hornets got a 3-for-3 day from Sarah Ingerick in their win on Friday.

Ingerick had a triple and an RBI and Paige Carr was 2-for-2 with an RBI.

Kohler struck out eight and walked one on the mound.

Mariah Berguson, Rachel Strange and Emma Koppenhaver had hits for Liberty. Berguson struck out four on the mound.

Sam Wood threw a perfect game with six strikeouts, never allowing a ball to leave the infield on Friday.

At the plate Wood had a home run, a double, four RBI and scored two runs and Taylor Ayres had a hit, a run and three RBI.

Sarah Hollenbeck had three hits, four runs and two RBI and Rachael Graham had a hit and a run.

Liv Kleet scored a run and Victoria Swansbrough had a hit and scored three runs.

Tioga is completed a suspended game at Edison today at 10 a.m.

The Crusaders got a home run, a double and three runs from Alivia Clark and three hits and a double from Mackenzie Maloney, but came up short against state-ranked Edison on Friday.

Kate Warren had two hits, with a home run and two runs scored to lead Edison.