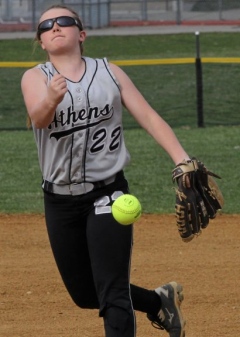 In a high scoring, back and forth contest Sullivan County outlasted Millville 20-19 in Heartland conference softball action Monday.

The Griffins led 6-3 when in the bottom of the fourth the Quakers scored nine runs to take a 12-6 lead.

Sullivan responded with back to back innings of six and seven runs but Millville hung in there, scoring four and three runs to match and the two teams headed into the seventh inning tied at 19.

In the top of the seventh Kayla Rosbach scored on a Mackenzie Doyle double to put Sullivan up 20-19. The Griffins then closed it out with three straight outs in the bottom half of the inning.

Rosbach had three hits and five runs scored to lead the Griffins while Alexis Kiess added two hits, including a double, with two runs.

Kiess earned the win, striking out six while walking six.

Troy was able to pull out a road win over Canton in non-league softball action Monday.

The Trojans jumped out to a 2-0 lead in the top of the first but Canton pitcher Kellsy Ross settled in after that.

The Warriors struck back in the bottom of the fourth to cut the lead to 2-1 but in the top of the fifth Troy scored again to go up 3-1.

They would hold on from there.

Taylor Johnston was 2-for-3 with 2-RBI to lead Troy while Kelsey Bristol, Faith Ceely, Brooke Mattocks, Taylor Murray and Brooke Losey-Root also had hits. Murray's was a double.

Bristol, Ceely and Kayla Stephani scored the runs with Stephani also knocking one in.

In the circle Kerrigan Hoffman started and earned the win. She went the first five innings, striking out three while allowing two hits and one earned run.

Jerilyn Ross finished out, allowing one hit with one strikeout.

Ross went 2-for-3 with two doubles and a run scored to lead Canton. Maggy Machmer also had a hit while Makenzy Route knocked in their run.

In the circle Ross went the distance for the loss, striking out five while allowing seven hits, three walks and three earned runs.

Hannah Reid went 3-for-3 to lead the Wildcats to the NTL win Monday.

The Wildcats got things started in the bottom of the third with three runs. Sayre cut it to 3-1 in the top of the fifth but Athens got that back in the sixth.

Reid had a double with a run scored and an RBI while Makenzie Hafer was 2-for-3 with a double and triple. Reagan Lynch, Miranda Peterson, Jensen Dunkling, Mackenzie Warner, Aubrey Allen and Haley Priester also had hits.

Lynch, Allen and Kaitlyn Testen scored for the Wildcats while Lynch also had an RBI.

In the circle Allen gets the complete game win. She struck out five while allowing three hits, one earned run and two walks.

For Sayre Kassandra Winters, Kaitlyn Cron and Maria Servedio had the three hits. Winters' and Cron's were doubles while Servedio's was a triple.

Brook Wampole scored their run with Servedio driving her in.

Winters scored the loss, striking out two while allowing 11 hits and four runs, two of which were earned.

The Black Knights found their bats as they pounded out nine hits en route to the NTL softball win Monday.

Alaina Wickwire and Emily Gorman both went 2-for-4 with a double and RBI while Koryn Wickwire was 2-for-4 with three stolen bases and a run scored.

Emily Strange had the two Liberty hits while Kristina Buchanan went 1-for-3 with a run scored. Emma Koppenhaven had a hit with an RBI.

Sam Wood led the Tigers at the plate and in the circle as they moved to 4-1 on the year Monday.

Wood was 3-for-4 with two triples, 3-RBI and two runs scored while also getting the win with 12 strikeouts, one walk and three hits.

Also for the Tigers Dani Barto went 2-for-4 with a triple, two runs and 4-RBI.

Britta Vergason (2-for-4) and Lexi Swagler (2-for-3) also had multiple hit games while Sarah Hollenbeck had their other hit.