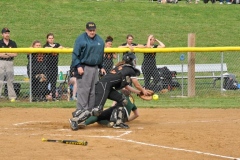 The win helps the Rams keep up in the NTL East with Troy who beat Sayre 17-1.

Faulkner struck out two and issued one walk.

Wyalusing scored three in the second inning then added a safety run in the fifth.

Arielle Kneller led the Rams at the plate, going 2-for-3 with a run scored while Kasey DeVoir, Crystal Shirk and Maddy Eberlin also had hits.

Alaina Wickwire was strong in the loss, striking one while allowing five hits, no walks and none of the runs were earned.

Koryn Wickwire had a double while Mackenzie Roof and Sam Schoonover also had hits.

Alexa Singer allowed just one hit as the Green Hornets wrapped up the NTL West title in softball action Friday.

Singer struck out five while issuing just one walk.

Singer and Jordan Butters both had doubles while Sarah Ingerick and Mackenzie Marple also had hits. Ingerick had 3-RBI while Marple knocked in two runs. Singer and Butters knocked in one run each.

Sarah Bates started and earns the loss while Gabby Ragalbuto came on in relief.

Wellsboro is at Canton Monday.

Down 4-2 the Panthers scored six runs in the bottom of the fourth to take a lead they never gave up in their NTL East softball win Friday.

Athens scored four runs in the third to to up 4-1 with Northeast getting one back in the bottom half of the inning. After Northeast's big inning they led 8-4 when in the fifth they added three more runs to secure the win.

Maddy Johnson went 3-for-4 with three runs and an RBI to lead the Panthers while Chelsie Souto (2-for-3) and Bridget Haverly (2-for-3) also had multiple hits in the game. Souto's included 2-RBI and a double while Haverly had a triple, 2-RBI and two runs scored.

Souto earned the win with eight strikeouts and six walks.

Katelyn Serfass struke out three and allowed no walks in the loss.

SAYRE - Bethany Manley allowed just four hits in picking up the win for the Trojans in NTL East softball action Friday. Manley had four strikeouts and one walk.

With the win the Trojans remain tied with Wyalusing atop the NTL East standings. The Rams beat Towanda 4-0 Friday.

Kelly Villanti went 2-for-3 with an RBI to lead the Redskins while Coolbaugh had a double with a run scored. Kristyn Tappan also had a hit.

The Wolverines rebounded from their 3-game losing streak by beating the Cardinals in IAC softball action Friday.

Shailei Kraft went 4-for-5 with a double, triple, three runs and 3-RBI to lead Waverly while Sam Mennig went 2-for-4 with a 2-run home run and 3-RBI.

Mennig started and earns the win, striking out four while allowing six hits, two earned runs and one walk.

Waverly is now off until sectionals.

Kellsy Ross threw a one-hitter for the Warriors in the victory on Friday.

Ross struck out three, walked one and allowed two unearned runs in the victory.

At the plate Ross had a double and two RBI for Canton.

Maggy Machmer and Emily Jennings each had hits in the game for Canton.

Kristina Buchanon had Liberty's hit in the game.

Madison York started and struck out three in 3 1/3 innings before leaving the game after being hit by a comebacker. Katie Carrigan struck out seven in 3 2/3 innings of relief.

Jessi Prutsman and Shanelle Ianson each had home runs and Ianson combined with Courtney Schauer on a no-hitter as the Indians picked up a victory on Friday.

Becky Plummer was 3-for-3 with a double and three RBI and Lexi Haylor was 2-for-2.

Ianson struck out three, walked none and allowed no hits in two innings and Schauer worked one perfect inning with one strikeout.