Towanda softball picks up win over NEB in eight innings. 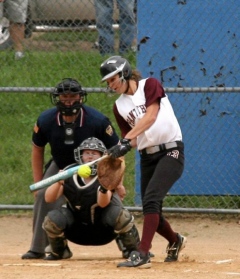 The game was tied at one after seven innings and in the eighth the Panthers struck first.

Calla Johnson had a two-out double and Monica Brown singled home Johnson to leave the Panthers three outs away from the victory.

The game came down to the bottom of the Black Knights lineup in the eighth inning, and they delivered.

Laci Manning started things out with a triple and an error by the Panthers allowed Manning to score.

Towanda's eight and nine hitters Sarah Dawsey and Kylie Cazassa each came up with hits and after the Panthers got an out, Mackenzie Roof got a hit to left field to score Dawsey with the winning run.

"I was very happy to pull out a win like this," Towanda coach Bryan Fuller. "The girls played great. Alaina (Wickwire) pitched another great ball game. It was an awesome game. Filly pulling out a game like this, I'm really happy for the girls. The 7-8-9 hitters came up big in the eight inning. Laci, Sarah and Kylie came up big. It was a good win for us.

"It was a game we needed to win, a confidence booster. We needed this win to stay alive in the NTL, it was just a good win for us."

With Troy beating Wyalusing on Wednesday, those two teams lead the NTL East with two league losses, while Towanda and Northeast Bradford each have four league losses.

Wickwire struck out six, walked one and allowed eight hits and two earned runs for Towanda in the game.

Chelsie Souto pitched 7 1/3 innings for the Panthers, striking out six, walking none and allowing eight hits and three runs, one earned.

Brown had the hit and RBI and Souto, Bridget Haverly and Maddy Johnson each had hits in the game.

Towanda is at Wyalusing on Friday and Northeast Bradford hosts Athens.

Serfass had seven strikeouts while allowing two walks and one unearned run.

Sayre took a 1-0 lead in the top of the first as back to back errors allowed Redskin Kaitlyn Tappan to score.

Athens scored in the bottom half of the inning as Rica Dimon found home off a Serfass single. Later in the inning Christin Dunkling scored on an error off the bat of Haley Priester to make it 2-0 Wildcats.

Athens got three more in the third inning as Morgan Westbrook scored off a fielder's choice followed by Kassandra Winters scoring off a Mackenzie Hafer single. The final run of the inning came when Hafer scored off a Dunkling sacrifice fly.

The Wildcats added runs in the fifth and sixth to secure the win.

Hafer went 3-for-4 with two runs and an RBI to lead the Wildcats while Serfass and Westbrook had two hits each. Serfass added 2-RBI while Westbrook scored a run.

Tioga got two runs in the fourth and two in the fifth and held on for the win after Spencer got four runs in the final two innings on Wednesday.

Dani Barto, Britt Vergason and Donette Hutchison each had two hits in the game for Tioga. Hutchison had two RBI in the game.

Sam Wood struck out seven, walked one and allowed four hits and four runs, one earned, in the game.

Hannah Lawrence had two of the hits for Spencer and she struck out five, walked two and allowed five runs, three earned, in the loss.

Tioga is done for the regular season and they await the start of sectionals.