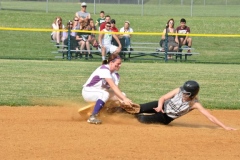 ATHENS - All game long the Wildcats hit the ball hard.

But, for most of the game those hard shots were right at sure-handed Shamokin defenders.

Athens pounded out eight hits in the game and rallied from an early 2-0 deficit, but a two-run seventh by Shamokin lifted the Indians to a 4-3 victory in the District 4, Class AAA softball playoff opener.

The first inning started off poorly for the Wildcats as Natalie Wolfe led off with a single for Shamokin. Jenny Hornberger followed with a single, and there was a collision between her and Athens' Christin Dunkling at first base, leaving Hornberger on the ground.

While Hornberger laid on the ground, Wolfe made her way around the bases, giving Shamokin an early 1-0 lead.

Shamokin added another run in the inning to extend the lead to 2-0.

"It was just that first inning jitters," Decatur said. "I knew we would be okay once we got past that inning and got our heads cleared. We were good to go after that."

For the first two innings Athens was unable to get anything going, with four of their outs coming on ground outs to Shamokin shortstop Helana Supsic.

In the third inning the Wildcats got some offense going as Morgan Westbrook singled and stole second and scored on an RBI double by Rica Dimon.

In the next inning Athens took the lead as the Wildcats scored two times in the fourth.

Mackenzie Warner singled to lead off the inning and Kassandra Winters grounded out, moving Warner to second. A single by Katelyn Serfass pushed Warner to third and an error on the outfield allowed Warner to score. Kaitlyn Testen came in to run for Serfass and she stole second and scored on a double by Miranda Peterson.

Athens kept their lead, escaping a jam in the sixth When Shamokin's Brie Bonshock was hit by a pitch and stole second. Cahterine Augustitus hit a line drive to left that looked like it would tie the game, but Westbrook made a diving catch for the Wildcats to rob Shamokin of a run.

In the seventh Shamokin got a leadoff single by Jacquelyn Augustitus and Kelsey Forbes reached on an error. Both runners moved to second and third with no outs on the throw.

After a Athens' pitcher Serfass recorded an out, Hornberger doubled to right bringing in the tying and winning runs.

"They hit the ball in a couple of holes and the one girl hit the ball hard and we weren't expecting her to hit it that deep," Decatur said.

Shamokin pitcher Carley Nash put the Wildcats down in order in the bottom of the seventh to wrap up the win.

Serfass struck out four, walked one, hit three and allowed seven hits and four runs, three earned, in the game.

Hornberger and Bonshock had two hits each to lead Shamokin. Nash struck out one, hit one and allowed eight hits and three earned runs for Shamokin.

For Decatur it is tough to say goodbye to his three seniors Christin Dunkling, Serfass and Searah Kennedy.

"It is hard," Decatur said. "Those three girls have been here for four years. They are a great group of girls, great senior leaders."