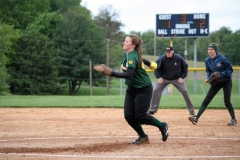 TURBOTVILLE - When Wyalusing's Ally Devoir led off the game with a home run, it looked like Warrior Run was in for a fight.

"I thought we got off to a good start against them," said Wyalusing head coach Jack Loomis. "I thought we could play with them."

But all the home run did was make Tay Parker angry.

After giving up the home run and a single in the first, Parker would strike out 14 of the next 22 batters she faced as the Defenders went on to win the District 4 Class AA quarterfinal against the Rams 9-1.

"We knew the top of their order could hit," said Warrior Run head coach Garth Watson. "After the first inning, Tay really settled down and got rolling.

"The home run didn't seem to bother Tay and she threw a solid game."

Parker struck out 15 and walked just one in earning the win. She gave up just five hits and now has 865 strikeouts for her career and 226 for the season.

Warrior Run will now face Lourdes Regional in the district semifinal at 5:30 p.m. Tuesday at Elm Park. Lourdes won 5-4 in eight innings over Southern Columbia Friday. Central Columbia will face Loyalsock in the other semifinal.

"We just have to take it one game at a time," said Watson. "We got hot last year around this time and we reminded the girls of that."

After falling behind 1-0, Warrior Run wasted no time tying the game in the bottom of the first.

Gabby Shrawder walked and moved to third on a Parker single. Shrawder would score on a Jackie Clemens sac fly to tie the game.

Courtney Stahl singled with two outs in the second and scored on Shrawder's triple to give the Defenders the lead and all the run support Parker needed.

The senior pitcher started the second inning with a strikeout and would strike out the next seven batters she faced.

Warrior Run added another run in the third and then closed with three runs in the fifth and the sixth to set the final score.

"If we can hit like the way we hit through the playoffs, it is going to take us a long way," said Watson.

Warrior Run pounded out 14 hits with five girls having two or more hits.

Parker led the way going 3-for-4 and Clemens was 2-for-2 with a double and scored three runs. Lynn Vermilya went 2-for-3 and knocked in three runs.

"Lynn has been smacking the ball around all year," said Watson.

Wyalusing was led by Ally DeVoir and Kasey DeVoir with two hits each.

"Parker did a nice job moving the ball around on us today," said Loomis. "Hats off to Warrior Run.

"They are a good all-around team and they deserved the win."