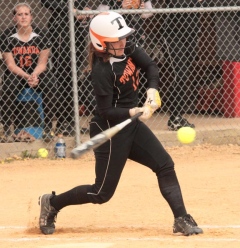 EAST TROY - Towanda's Alaina Wickwire threw a one-hitter and the Black Knights shut out the Trojans, 3-0.

Wickwire struck out six and walked one in the game, while Towanda got two second inning runs and added a run in the seventh in the victory.

"I thought we played a great game tonight," Towanda coach Bryan Fuller said. "The girls played with poise and confidence. I think this is the best game they've played all year. Because of an injury I had to change positions around and they responded great.

"Raven's three sacrifice bunts were outstanding. Mackenzie Roof's RBI single in the sixth inning was the difference in the game and put us up by three runs. Alaina pitched terrific. She shut down a very good Troy team. To bounce back after a tough weekend in Williamsport should tell the girls just how good they are."

Koryn Wickwire had two hits and two RBI and Tori Wellilver had a hit.

Cecilia Morse had Troy's hit in the game.

Hannah Jackson struck out seven and walked seven for the Trojans.

Troy is at Sayre and Towanda hosts Galeton on Wednesday.

Katelyn Serfass threw a one-hitter for the Wildcats, striking out five, and walking just one, while allowing only a solo home run to Brittany Crumb in the fifth inning.

"Katelyn Serfass pitched a great game and had excellent support from a error free defense," Athens coach Rich Decatur said. "Every girl on the team put forth a great effort on defense and more so on offense with exceptional hitting. Alexa Daddona had her first home run if the season."

Jensen Dunkling had two hits, with a triple and a double, two RBI and three runs scored.

Mackenzie Hafer had a 3-for-3 day with a run scored and Miranda Peterson and Rica Dimon each had hits, with Dimon getting a double, an RBI and a run scored.

Kierstin Horton had two hits and scored a run and Abbie Beck was 3-for-3 and scored four runs.

Nicole McCaslin started on the mound for Liberty.

Emily Faulkner had a perfect game in three innings, striking out five for the Rams.

Wyalusing had 10 runs in the third to get the victory.

Kasey DeVoir had two hits, both doubles and scored four runs and Cathryn Pugh had two hits, two runs scored and an RBI in the game.

Mataya McPherson struck out two and walked three for Galeton.

The Panthers pounded out 18 hits in the victory on Monday.

Kelsey Carlsen had a 5-for-5 day with four runs scored, a double, a stolen base and two RBI and Nicki Emick was 3-for-3 with six RBI and Aubri Mosier had three hits, an RBI and a run scored.

Calla Martin had two hits, with a double and an RBI and Monica Brown scored a run.

Haylie Phillips had three hits, with a double and an RBI and Courntey Coleman scored three runs, while Mackenzie Moore scored a run.

Maddy Johnson had two hits and scored a run.

Nicki Hurler had two hits and scored a run, with a double and an RBI for Williamson and Kim Daugherty scored a run.

Sierra Magnotta had two hits an RBI and Jamie Cook had a double and an RBI.

Phillips struck out seven and walked one, while hitting one and allowing two earned runs for the Panthers, while Jenna Hugic started on the mound for Williamson.

Shanelle Ianson had a 3-for-3 day with a two-run home run and Jessie Prutsman was 3-for-3, while Courtney Schauer was 2-for-4 in the win.

Ianson got the win on the mound for the Indians, going the distance.

Brooke Kohler, Paige Carr, Jordan Butters, Lauren Bleggi and Breyann Campbell all had hits for Wellsboro and Kohler and Campbell had two RBI each, while Carr had an RBI in the game.

Kristyn Tappan had two hits, with a two-run home run in the fifth and Rachel Hurley and Des Waltman added two hits each for Sayre. Waltman had a double and an RBI.

Tappan struck out for Sayre.

Wellsboro is at NEB on Wednesday.