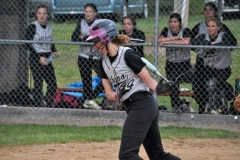 WYSOX - Mackenzie Hafer was 3-for-4 with two doubles, a run scored and five RBI as the Athens Wildcats notched a 7-3 victory over Towanda on Thursday afternoon.

Katelyn Serfass had a hit, an RBI and a run scored and Mackenzie Warner and Kiersten Horton each had two hits in the game.

Serfass started for Athens, striking out eight in the game and Christin Dunkling finished on the mound, striking out four for the Wildcats.

"It's hard to win a game when you strike out 12 times," Towanda coach Bryan Fuller said. "You have to hit the ball."

Koryn Wickwire had a double and an RBI, while scoring a run, for Towanda and Michelle Aronson had two hits, with a double, and a run scored.

Alaina Wickwire had a double and an RBI in the game and Emily Gorman had a hit, while Kylie Cazassa had a hit and scored a run for Towanda and Mackenzie Roof had a hit for the Black Knights.

Alaina Wickwire went the distance on the mound, striking out seven.

At the plate Michaeleia Mead had two hits and an RBI and Courtney Schauer added a hit in the game. Renee Farman and Whitney Earle each scored runs for CV.

Lauren Bleggi and Jordan Butters had hits for Wellsboro and Maggie Smith started on the mound for the Green Hornets, with Brooke Kohler finishing the pitching.

Williamsport scored three in the third and sixth innings and four in the fourth to get the victory on Thursday.

Katie Jackson, Kelsey Bristol, Cecilia Morse and Brooke Mattocks had hits for Troy in the game.

Hannah Jackson struck out five and walked six in the game.

Troy is at Liberty today.